back to normal. Back to real reality, leaving two days of fully packed AR at AWE behind. Finally I can take the time to summarize for the ones who missed it, for the ones who want to recap and point out interesting talks and demos. A first dive into the mixed reality realms from the augmented world expo Europe. More to follow. 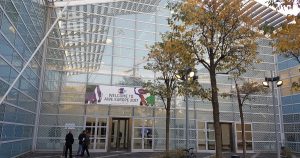 What’s the AWE? What did you miss?

The AWE is in its 2nd year in Europe and already attracted (own statement) around 1500 attendees, 115 speakers and 90 exhibitors. It sure was crowded! It was a good mix of new and old faces and companies. There sure was some nostalgia included for the Munich people (like me) thinking of the early AR days, coming from TUM or metaio… AR really has come a long way since then and attracts more and more people. It was rather B2B focused and you could smell the German industry proximity at every booth. Nobody dared to show a funny rainbow on a marker-demo – almost no marketing gags. Only serious AR, b*tch! It felt like a well informed B2b executive / mgmt / tech crowd, but less creative or artsy than on other events. A bit more industry nerdy, so to speak. (Numbers confirm 40% c-level / exec, 20% product mgmt, 18% creatives…) Happy to have seen people from all over the world, including the future! 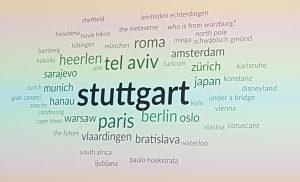 Ori opened the stage and did the pep intro envisioning superpowers coming to the people – right now! At WARM 2009 it felt 10 years away, now we are getting real close. We need to chose and be careful to select the right path: every technology will bring promise and peril (hint: choose promise!). So, as humans with our great USP to adopt easily, let`s use the tech to transform the world into a better place – and augment us externally through wearables – holding the Borg at a distance for now!

Then big brands like Coca Cola showed their usage of MR tech, Skylight showing their training scenarios, Bosch their Common AR Platform (CAP) to allow multi-platform publishing. Re´flekt showed their new “Reflekt Remote” solution, Ubimax their “frontline creator”. Vuzix talked about the launch of their own store and the Blade AR glasses for consumers to come. The overall direction of all these industry players was the same: AR is being used today to reduce training and maintenance times, optimize processes and everyone seems to create platforms that allow easier content creation for their workflows. It might have been less funky, but you could really see the focus on actual use cases in everday (business) life.

Besides, tech partners like Google, vuforia, wikitude or also Re´flekt showed their latest software packages. Meta entered the stage and gave one more live demo (my own review to follow) and announced SteamVR-support for the Meta2! Interesting sessions on medical AR came from Nassir Navab with Simon Weidert. Thad Starner (always wearing his Google Glasses) explained the way we can make computers adopt to a human world. Interesting thought: real AI advances in that direction will only happen when we give AI arms and legs – so that they get the full “human experience” moving around physically. An AI sitting in a grey box or the cloud alone won`t do the trick. But then again, when you give computers arms and legs you know what happens… 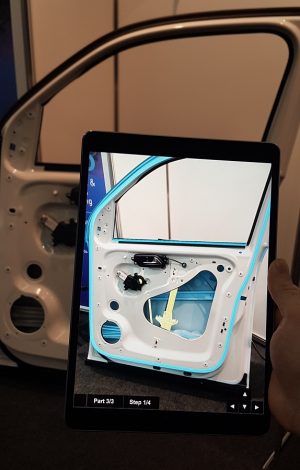 When entering the exhibition area you get struck and get a smile on your face to see so many AR glasses. Your booth rather stood out when you didn`t have smartglasses. Honestly, I´ve never seen so many Hololenses in one room! But many other players showed their systems, too, of course. The weird DAQRI helmet (though I love the thermal vision), the comfy and slim ODG glasses, well known Vuzix, Epson, Kopin, Trivisio… Many demos showed again the concepts of less-funky but implemented scenarios for remote assistance, telepresence and maintenance or training support with smart glasses. One specific setup thinking about practical use was the one from AR-Experts: showing a Hololens setup for assembly / factory training. The smart part: the trainer can set up the complete training scenario within the Hololens and define next steps and fix locators to 3D world positions easily. In these demos you notice the industry drivers behind and that it´s well understood how workflows can be optimized and how to really make use of the current tech today. Bosch and Re´flekt showed further AR´ed training and manuals (e.g. for a motorcycle x-ray vision). The best demo for me was the freshly ported version of Fraunhofer IGD´s CAD-based tracking visionLib for the Hololens! The demo showed a shiny factory-fresh car door that could be directly tracked accurately by the Hololens – knowing the simple outline shape of the geometry as CAD data. It only took half a second to snap in during start-up, but was very stable during movements and close-ups later on. I strongly believe that this is one large missing piece and a game changer for a lot of upcoming applications! (Worth an extra post.) 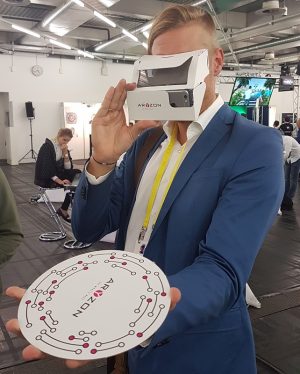 Other demos I really liked where e.g. the cool Holoportation-style demo HoloCap using one Kinect sensor to bring real people into VR in real-time, the massless pen to draw in free 3D for VR (accuracy was really good, but the volume to draw in still really small) or the demos from the Holo-Light staff: they also had an interesting pen to have high accuracy 3D drawing for the Hololens (using extra tracking sensors to be attached), but unfortunately the demo was kind of shaky in the wifi-blutooth-noise of the exhibition area and it was hard to judge – but worth to follow. But their other demo on using AR for educational purposes was really great! Pretty-looking holographic math explanations (showing the Brownian motion this time). The project aims at an open development framework to be used in educational and museum contexts. Worth a visit, too!

Many smaller demos showed a wide range of different ideas, including (as always weird) video-see-through AR, or a clever indoor navigation using ARCore, but starting off with a beacon for initial positioning, I finally had my first AR-Cardboard experience with Aryzon (tracking is a bit off, but the sensation is real – take the cardboard for your kids and leave the Hololens locked up!)… Well, let me mention more and more demos during the next days on twitter and the other social channels! Be sure to follow!

Winners of the Borgs 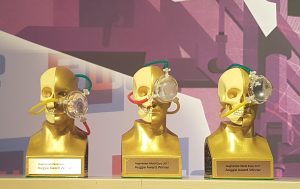 Though the Borgs are luckily still some time away, there were beautiful handcrafted auggie awards to win again. There were three worthy winners – congratulations! So, worth checking them out: The Best-in-Show AR was Seabery, with their soldamatic augmented reality welding training solution. Best-in-Show VR became the before-mentioned HoloCap and the Best-in-Show EyeJack by Sutu – bringing some really pretty AR magic book concept back to life: 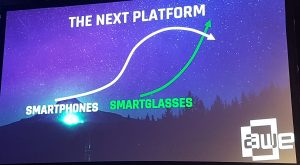 So, let`s me wrap up the first piece. I really liked the crowd and demos during AWE EU 2017. The industry focus clearly shows what is actually working today, what can be used, where the low hanging fruits may be… and that sometimes you don`t need fancy 3D holograms, but rather something that really solves a pain and brings down your training or production time. This seemed to be the clear message: it really is working and being used. We cannot wait for a Magic Leap, but can use AR today for specific scenarios. More will come along the way! If it´s a simple HUD today, that’s fine. If it`s a tablet or phone – that`s fine for now… but obviously we are all still peaking into the direction of better smart glasses.

Speaking of those… in my next posts I will take a closer look at this future with my hands-on on the META2 and the Avegant lightfield display and other goggles! Be right back. Yep, still in awe! Cheerio!