Out of office during summer slump… did I miss anything?

The Magic Leap One

I was hit by surprise that all of a sudden Magic Leap released their ONE out of the blue. I guess most of us where expecting more a Q4/December release, instead of a summer slump stunt! But, hey, I don’t mind! Let’s get our hands dirty with it and benchmark the $*%& out of it to compare and rant. By now you probably saw the reviews by Karl Guttag, the rant by Palmer Luckey and you saw more emerging demos on the web or youtube. I will be able to try out the ML1 next week, so I’ll be getting to my own hands-on review and rant or praise afterwards and not speculate today. 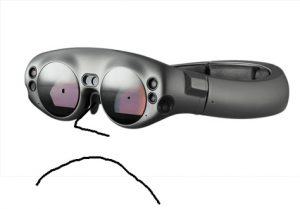 But it seems that reviews boil down to “it’s slightly better than the HoloLens” with a bit better field of view, a bit worse tracking, a stupid controller with a lot of jitter, a comfortable head-gear with less weight (due to the disc computer on your belt), restricted vision – horse blinder style – and missing content and missed expectations.

The hype built up too much and Magic Leap failed to address this in time. Wait, maybe not only the hype was too big. Also the investment?! Right now it feels like a HoloLens 1.5 but with an incredibly high funding. Well, I’ll better stop here: first my own hands-on review, then the review.

What I do like is their (marketing-style) enthusiasm and their target audience not only being B2B and industry, but also searching solidarity within the artist realm. The Sigur Ros still seems pretty cool and other demos followed. Artist demos sure are easier magic tricks: less constraints or KPIs to hit for “real life B2B” cases, so maybe tracking failures are more acceptable when moving through spherical music. But still, I love their twist and creative view and usage on AR.

To catch up with the developers and hopefully show more demos, give more insights, they just announced their own Magic leap developer conference “LeapCon” to be held October, 9th-10th: https://www.magicleap.com/leapcon!

Rumors on more to come and confirmed late summer plans

So, what can we see next? During Gamescom conference in Cologne, Germany, there was little news on mixed reality. If at all, it was Virtual Reality with some well known headsets. Not even a huge facebook booth with Go’s for all or with focus on their “AR camera effects”, etc. Kind of a bummer. Meanwhile, Microsoft stated they were almost ready with a VR-headset for their XBOX, but skipped it due to missed quality expectations or too little market chance. Hopefully this won’t be the case for their recently rumored HoloLens 2 plans. I hope to hold my HL2 in my very own hands Q1 2019!

Up next is Digility conference in Cologne, Germany on September 26/27th. Check out their speaker and demo lists to see what’s in it for you and your mixed reality needs. When I’ve been there I really liked it a lot with a good mix of tech and content / philosophical / artsy discussions and presentations.

If you are in the States during these days, you’d probably attend the Oculus Connect (Sept 26/27). Can we expect news on their 6-DOF free-of-wires VR headset “Santa Cruz”? Could it ship with stereo front cams to be able to switch to an AR view and cover the whole mixed reality spectrum? Or will Facebook/Oculus dig deeper and present some other AR news? I’ll get my popcorn ready for the show!

Stepping through the list, Apple will be presenting their new line of smartphones 2018-style. Will we see something new on AR? I doubt it. Probably some fun demo included, but all new Apple devices should include ARKit demos without a doubt. I don’t see glasses on the public roadmap just yet.

Mid-October will be a good moment to stop by in Munich. If you are not there already for Oktoberfest, NOW you should go: Augmented World Expo EU and ISMAR conference team up for a full week of Mixed Reality awesomeness. Augmented.org will be there on location to report on everything AR! This is gonna be a great feast – from more R&D focused ISMAR to more market-ready AWE, I’m sure we will have a blast! Augmented.org is oficial media partner for both events and you can learn more about the double-feature conference here:

During the shows, I hope I can see also updates on the AR cloud, esp. from 6D.ai and how we can better stitch digital content into our surroundings and have great multi-user experiences. Project North Star from Leap Motion expands their activities further (to Japan), so I hope we can see some prototyping during Munich AR week! I already interacted with Keiichi’s cat in VR. Now it’s time for AR!

So, pretty packed schedule for the next months! I will also be on location in Munich and test the shit out of all your demos! So make sure to drop me a line before, that I don’t miss your awesome tech demo, hardware, R&D project or … drinking a beer with you! :-)