Microsoft`s dog Rover is alive in the Mixed Reality OS

Microsoft just presented a new video showing their plans of a mixed reality operating system. I`ve reported on their (concept) plans on it in early July with their marketing designer video. But now it seems we are getting a step closer to reality. Or do we? Microsoft states specific steps and timings!

In the new video (below) they claim to support all from “VR, AR and MR”. Given the previous selection of terms (Microsoft typically referring to AR as MR) you can ask yourself why they include all three now and what they mean by that. But those are just acronyms. More important is that it works. We are supposed to be able to switch between AR and VR and run all Windows 10 apps – be it 2D or 3D – on the new mixed reality operating system.

The demo shows a woman in a room-scale demo with a controller stick that is tracked in space as well. The HMD she puts on is no known device, nor does it remind us of the Hololens or other Microsoft products. In the demo she runs some windowed applications before she goes on a virtual infotainment journey “HOLOTOUR” to Rome. Take a look:

The demo shows some established concepts, most prominently the virtual desktop with multiple windows. We see it on the Hololens, but also nicely in apps like Envelop VR where you can run all your windows on the Rift. The teleportation to a tourist spot going into an immersive view is also presented nicely.

What I was a little bit afraid of was to see Rover, the old Microsoft dog from “Bob” inside the video. Bob was an additional Microsoft program to provide a more user-friendly interface for Windows. Though the easy metaphors of having a living room, a “physical” calendar on the wall, etc. had some potential – the software failed miserably and become the laughing stock in Bill Gates` history. It´s dog Rover got on our nerves later in the search function of Windows XP. Everybody tried to turn him off as quickly as possible (like Clippy). But dog or no dog – to be fair: their old approach could now really come to life and make sense. Building a more user-friendly interface could finally work in VR and especially AR. The UX people and software engineers in Redmond could finally get their absolution. We got used to using windows, a mouse and abstract symbols to do operations. Now the system could lead back to more natural interaction and concepts for human beings. Critics said, “Bob” would hinder users to learn the Windows concept and that it would be slower rather than faster in using it. Here you could ask: so, why should we learn a windows concept to begin with? Can´t we just act within the virtual world like we do within the reald world? Maybe Microsoft has something up their sleeves to go into the right direction. 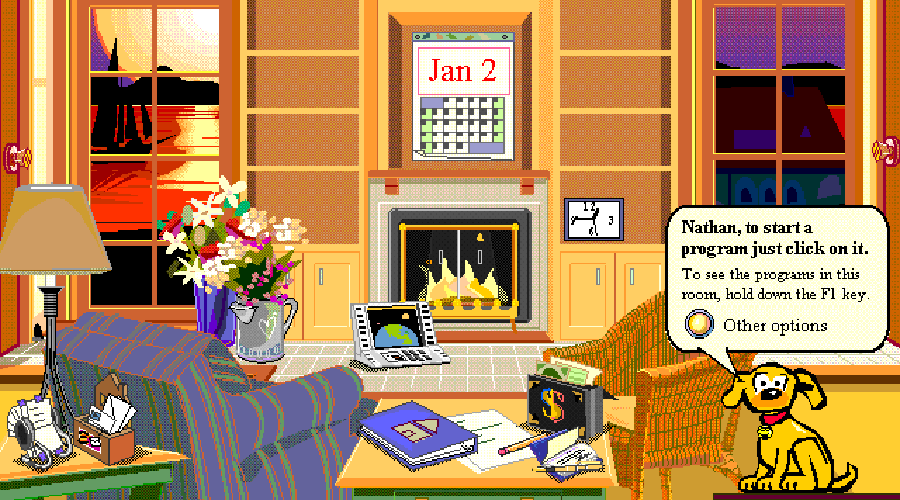 But the video itself is a bit low key and simple to be honest. The environment is rather simple, the demo is short and not as highly produced as earlier videos. Also, we don´t see any gesture interaction or multi-user scenarios. Seems like it needed to be finished quickly to have something to show.

They do not show how the tracking works or how the switch to AR would happen. They state to support a “broad range of 6 degrees of freedom devices” and that you can run the Windows Holographic shell and all Windows 10 applications. Release of version 1 of the specs is to be released in December as one developer writes. He also states:

Next year, we will be releasing an update to Windows 10, which will enable mainstream PCs to run the Windows Holographic shell and associated mixed reality and universal Windows applications. The Windows Holographic shell enables an entirely new experience for multi-tasking in mixed reality, blending 2D and 3D apps at the same time, while supporting a broad range of 6 degrees of freedom devices.

So, will we be able to jump into it with Rifts, Vives, METAs and Hololenses at free will? Will it really be ready in 2017 for the consumers as claimed? That would be really quickly!