Today, to continue, I want to show my favorite two demos. They won for me, because they gave the best “mixing of the worlds” experience and show the potential of true AR with great interaction demonstrations. To really get the feeling of the virtual objects being there you just need a better form of manipulation (maybe even with haptic feedback). Not only some sweet rendering. So here we go! 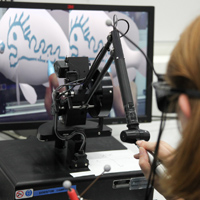 The demo with this tricky name is officially focusing on the calibration process to have a more reliable setup including a tracked stereo HMD, a tracked Wiimote and a Phantom arm for force feedback interaction and operation in a mixed reality. To learn more about the optimized calibration you should go to the ISMAR page or check the paper directly. I wanted to mention the demo here, because I loved the true mixed reality feeling that was unique on ISMAR 2014! Seeing some virtual fish floating in front of you seen via Stereo HMD is fun, but adding a Phantom haptic’s device with force feedback to use it for painting on the virtual object is really impressive and adds a whole new level to MR experiences! I’ve seen many VR demos with these devices, but here it was the first time a mixed reality experience how it should be for a great feeling: really mixing all senses! 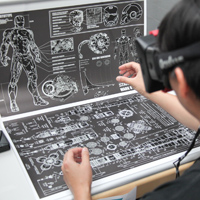 Then I want to mention the great demo that was presented by Thammathip Piumsomboon (working with Adrian Clark and Mark Billinghurst on it). It uses an Oculus combined with a Kinect to realize an Iron Man-like interaction in 3D space! It uses different gestures to manipulate objects in 3D along with speech recognition and also uses occlusion between real and virtual plus the stereoscopic augmented view! You can see some interaction examples in the video below. Although the setup on location was sometimes a bit shaky one could see the great potential and the working concept behind it. I really loved the immersive feeling in the mixed reality scenario that really showed the future of how human-machine-interaction could work. You could manipulate the virtual objects with your bare hands, see all in stereo in your real environment and switch (like Tony) into a fully VR mode by scaling it all up with a geture on your hands. Until now we could only see this from Holywood, but now it’s getting live! Tony Stark would have liked that! Can’t wait to see more of it! It gave the best mixed reality feeling next to the demo above.

Below now the video compilation of all mentioned demos (last & this post) plus many others (stating their paper/demo title from ISMAR proceedings for reference). Enjoy!