today I want to show a single demo from the fair (while I’m editing the other media). It was a small demo without big attention, but a real neat one, that can have big impact on the form we interact with AR! So, let’s talk about the… 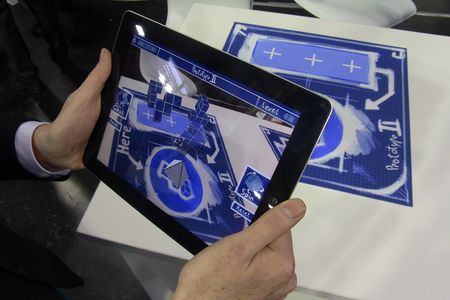 metaio shows a neat little demo game, where the user can grab and spin around some 3D tetris bricks and needs to put them in a certain 3D position under time pressure to win the game. No biggy, you might say.

But this demonstration shows an important topic, that is quite often forgotten or overlooked: a natural way of interaction with the augmented objects. So many demos are out there, where the user gets a nice overlay, a remote controlled car, a flying saucer or a dinosaur. But most of the time we still don’t interact at all with these objects (typical marketing use case of just the wow-effect of rendering something into our world) or we interact clumsily by pushing buttons on the touch screen to trigger some indirect action. E.g. we might have buttons to move objects around or in a better version we smudge our fingers over the screen to drag objects in 3D space (with a 2D gesture!). Now the video below shows another approach with a direct mapping.

The big advantage is a natural positioning in the real 3D space. The fun of it in the game sure is to have to physically move around quickly to fulfill the task. Obviously this can also get annoying for longer work. But it sure is the best direct human-machine interface, that is closest to reality. Have a look!