metaio’s insideAR closed it’s doors for 2013 and I am now digesting all infos and demos. Today I want to summarize the keynote and continue with the demos in the next post. A great show definitely! I had great fun, met many cool people again from the industry and sure saw many cool and found a few really amazing demos and ideas I will list in the next days!

This was the motto, when CEO Thomas Alt hit the stage in front of around 800 attendees from 33 countries. Surely, a big scale European AR gathering! He talked about the three building blocks of wearables, enterprise and technology to empower new applications. Progress in these areas enable new use cases. 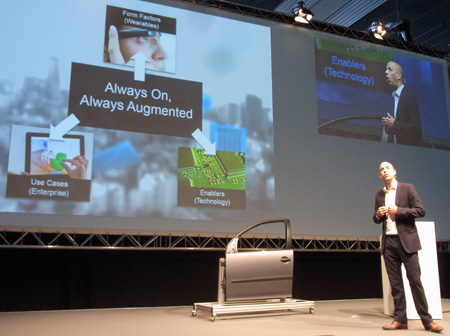 These can be on a macro or micro scale, leading to new AR scenarios outdoor, indoor and to new forms of interaction with objects and humans. This can range from new navigation tools, virtual information systems (like POIs in a city), design process supports (e.g. for architecture), AR-aided teaching, gaming (large scale outdoor games like Google does with Ingress), translation tools (signs, text,…) to virtual fitting for a better online shopping experience.

A few demos were listed for these fields, e.g. the new IKEA solution (with SLAM tracking), the Audi eKurzinfo, the highly recognized Volkswagen “Marta” project with repair helper AR for the new XL1 or others. I will sure take a closer look at some of the demos next time! 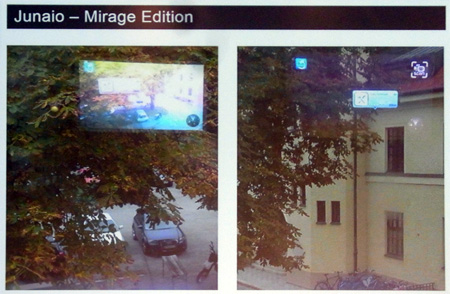 CTO Peter Meier then took over and was asking himself and us the question how the smartphone of our children will look like? Will they just get thinner? Hopefully not! Of course, this was targetting the move towards wearable (or just worn) computing and the philosophy of an always on mode with glasses-styled devices. To foster this development, metaio made a first integration of their world with Google Glass and other HMDs like Vuzix. To better support HMDs, junaio gets a new mode to allow see-through overlays better: the video gets removed (when used with an optical see-through you will see the real world directly) and the UI gets cleaned up. New interactions forms are being tried for interaction. E.g. you obviously cannot touch the screen anymore when using glasses, so the swipe commands on the frame of the glasses come in handy. This new mode of junaio is called “Mirage” (junaio Mirage Edition). 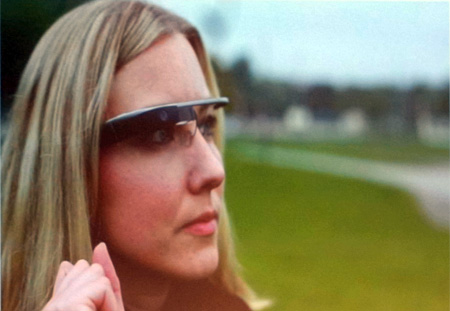 The current problems today is the battery life of around 15 minutes when doing AR with overlay, video tracking and all. This is where the development of the AREngine2 will come in to extend battery life dramatically with the power efficient “AR processor”. We hear numbers of 10h operation time, so let’s see, what will be realistic in the end… 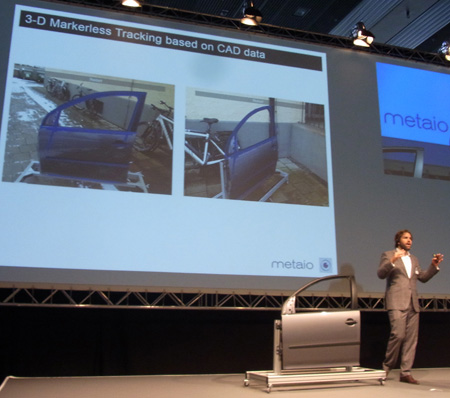 Talking about news from the technical side, the 2D tracking was further improved and said to have double performance, SLAM- and 3D-based tracking has twice the accuracy and 4 times the robustness as before (now in Version 5.0). Newly introduced was the (I think really cool) edge-based tracking, that does rely on edges for initialization, generated from CAD-data before. A perfect way to start tracking easily and to accomodate for changing lighting or changing textures (I’ve described this in a last blog entry). 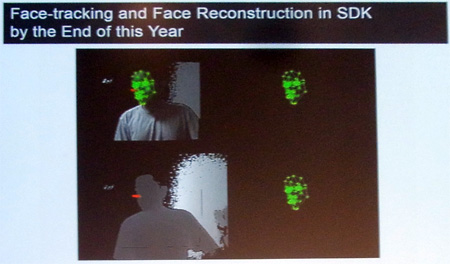 Besides, there were news on face tracking and facial reconstruction from depth cameras and the newly introduced continous visual search: a cloud based look-up table for up to 100.000 feature reference maps, that could be used to use your smartphone to scan a bluray cover and get the correct information returned – without the need of having 100.000 movie case information downloaded and searched locally. 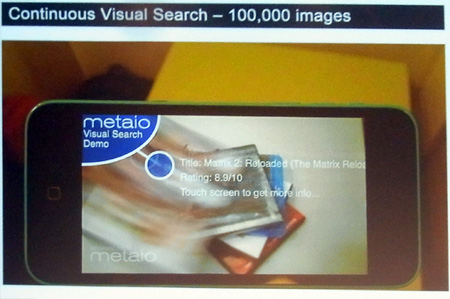 Then, Michael Kuhn talked a bit about the new products released concurrently to insideAR 2013: being now in version 5.0, an updated SDK, the new Creator 3.0 and extended junaio. The SDK now supports customized shaders to support more advanced visual effects and has an improved rendering performance of 2-7 times faster. The Creator comes with a few new handy features to improve the workflow and to allow the creation of edge-maps for the tracking… more info to come on this one with my demo post!

While in 2003 there were only 3 “real” AR companies, Thomas stated, now in 2013 we have around 100 dedicated AR companies on the market! We can sure see the wide-spread adoption and the market for this technology. The world is ready to make use of this tool to create new compelling applications!