today I’d like to go over a two demos I consider neat and nice. In the end there were over 35 demos I counted, so let’s focus and get it started with one of my favorite setups:

Obviously, we’ve seen demos like this before (also from us), but this new demonstration has a specific twist to the topic of projection-based augmented reality: it uses a projector plus a depth camera (like the Kinect) to do the tracking. No RGB-camera is used. The setup is shown here: 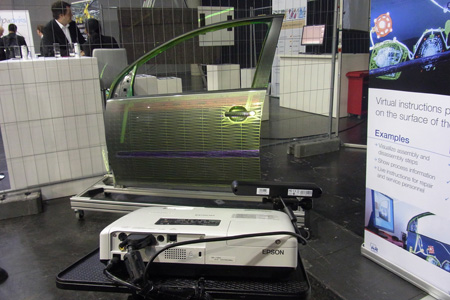 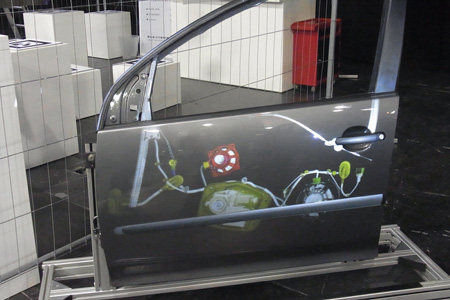 The big advantage of this is two-fold: first, you have an easy initialization, when matching CAD data against your real model, aligning it with the depth information. Second, you have best light conditions for both worlds. Why?

A projector needs a dark room at best to show most pleasing results on the surface. Daylight demands for a really strong projector and will still cause (possibly unwanted) reflections on the shiny materials. – But a typical marker-based tracking (via an RGB-camera) will need this bright light to work well… So you end up with tweaking the light to work “as less bad as possible for both sides”. Ideally, you could work entirely within darkness. This is exactly the case with an infrared version of it using the depth camera. So now we have the best for both!

The demo was really convincing, accuracy was enough for a typical training / presentation scenario. Probably not for a fine measurement or construction task. No numbers given, but overlay looked matching in the range of a centimeter.
No product (and hardware bundle) version of it yet, but sure a thing to follow up with…

If you want to try out an Oculus Rift without an Oculus Rift and even without a PC, you should take a look at the shots below and go to the website of VrAse. (They just managed to successfully raise their pledged amount on Kickstarter – so chances are good to see this in stores one day! Congratz!) 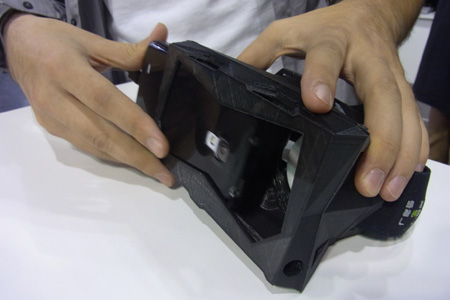 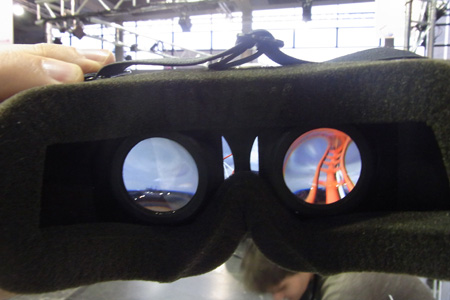 they did the simple trick of putting your HD smartphone into a case, like a diving goggle set, similar to the Oculus. But the more important part is an additional App and extended Android operating system, that allows to use the sensors of the phone for head-tracking and split-screen stereo rendering.

The beta version of the software was already nicely integrated into the Android settings menu, allowing you to activate stereo-mode on landscape mode, adjust tracker settings, etc.

Definitely this case + software is a great alternative to watch some stereo movies on the way or to play some mobile games with it – once it’s out and developers adjusted.

Right now a new video is available by metaio to summarize the fair from their point of view, so let me briefly add this here. Enjoy!

I’ll continue on some demos next…