What is Augmented Reality? (Me interviewed for the ARBook)

Hi everybody. Yoni Binstock published his 2nd edition of “What is Augmented Reality – Everything You Wanted to Know Featuring Exclusive Interviews With the Leaders of the AR Industry” in May 2020. As the title states, he interviews AR professionals on their personal views on AR and their vision for the future. I’ve joined the circle and am featured in the book with an interview. Now I wanted to share my interview with Yoni here, too. Please check thearbook.com to get a virtual or physical copy of the great book! It’s definitely worth reading all the interviews with AR industry leaders.

Yoni Binstock: What excites you the most about augmented reality?

Tobias Kammann: When I started looking into augmented reality as a computer science student it sure was the technical challenge and visual surprise to see things pop up on a marker in real-time. At that time of software like ARToolkit and its “Hiro” markers, it was still a surprisingly new magic trick in the comparably slow computer era. Later on, I worked for different CGI productions and was always amazed comparing both worlds and I thought: one day AR could become a tool to integrate visual effects into the world in real-time. Today we already crossed this border and it’s pretty cool!
But these neat visual results and fancy effects of AR are not the most important. To me, the concept of Augmented Reality is the best way to fully integrate digital data into a human environment. Like a reversed Tron movie script! It’s not only some fun add-on but rather the base for all future computer interactions. Even in 2020 we are still stuck to flat screen windows staring at data from our chairs using very odd interaction handles. Augmented Reality is a completely new way to approach personal computing and digital content interaction. In my vision of AR, we access all tools with human-centered, natural interactions. The way the IT world should have been designed from the start – if it would have been possible back then. No bulky grey machines or awkward indirect interactions on a desk. Just digital content merged into the real world where it is needed, where it allows easy access in three-dimensional space with simple controls and no need for special IT training before you can use it. There is still a lot to research and to create – ranging from hardware to software. That’s another exciting thing about AR: it’s our generation’s task to create the base for merging the digital with the human space! 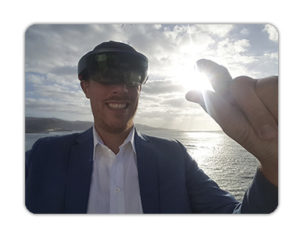 What do you recommend for people who want to get into the AR field?

First, ask yourself why you want to get into this field. Like with all fields of activity – be it for your job or your personal life – you should be passionate about it to create something meaningful that is fulfilling. Not just add some AR feature to your smartphone app “because you can”. I’ve seen enough apps using a “Magic Book” pop-up case or face filters that are so very useless after the first five seconds of its wow-effect. A personal vision is important.

Now it depends on your skillset and role. Are you a dedicated 3D artist, UX designer or programmer? Solid training is key to get things right. But sometimes it might even be helpful to break out from the classic training and join the AR team from an “external” viewpoint. For example, not being a classic interface designer, but rather an artist, industrial designer or educator without any deep knowledge of today’s software or AR implementations. This way you can keep a clear mind and bring new and fresh ideas on how to design the computer of the future. As said, easy and natural human interaction is key and must not mimic old point-and-click metaphors. For instance, “natural interaction” can get absurd: why would you bring a 3D phone into your AR experience to represent telecommunication? If you take away the historical references of analog tool design, there is no need to copy it. I think a deep dive into new interface design is needed and will be important for all successful augmented reality applications.

What are your predictions for the AR industry and technology in the next 2, 10, and 25 years?

Right now, especially consumers are stuck with mobile phone-based AR. The window-to-another-world metaphor is not really practical unless you want to previsualize your new furniture. Most narcissistic kids are using their digital selfie mirror to optimize their looks before posting it to the overcrowded digital photography world. Sadly, over the next two years, people will still know AR for these kinds of applications. It only works for short moments and you return to your desktop PC for real work.

Sticking to the milestones in your question, I would say in 10 years it’s pretty hip to wear AR glasses. First at your job, later out on the streets. Still, there are a lot of hardware issues to be solved. Fingers crossed! Hopefully, we’ve reached parts of my above vision by then to create a new era of spatial computing.

But in 25 years, I hope wearing AR glasses is a No-Go or retro. What is better than wearing AR glasses? Not wearing glasses! I expect robotic, AI and overall embedded technology to do their work below the surface. The hidden IT tech should just do its job and only pop up with information to the humans when needed. Humans should be freed of their peasant roles wearing life instruction glasses. For example, why have a HUD with navigation instructions in your car when it drives autonomously? Why do AR step-by-step instructions for mechanics if the robots could repair themselves? But what if we still want to interact with digital content or remote people? We can resort to AR – hopefully with advanced projections and holographic systems that can avoid glasses or creepy AR contact lenses to give us an even better augmented reality experience.

What do you think will be the positive and negative consequences of living in an augmented reality future?

I hope that people will be less bound to PC workstations, screens, and desks. They will return to more human-centered workspaces to enjoy their daily routines more agile and in space – not statically staring into a glowing box. Their creativity and communication will be supported by more direct and human interactions. If we do it right, technology will serve as a tool for everyone to learn and communicate – with low entry barriers and high availability. A lot of resources will be saved, and a new minimalism will become omnipresent (why still have a physical TV on your wall?). People might switch to virtual status symbols, but in the end, this would still be better for all – for your less cluttered home, your free mind, and the natural environment.

I fear that people right now are too technology-focused and willing to outsource their brains to the machine. AR sure could foster this. If you have your digital prompter always available sitting on your nose: why remember facts, instructions, birthdays, names or routes? Of course, this is already the case with smartphones, but it feels like it could still get much, much worse. We will get too dependent on technology and will be in love with the gadgets rather than with the significant other on the flip side of the specs. People might flee into a drug-like immersion with their AR content. Humans will escape the current physical situation around them and lose focus of what really matters. If AR becomes really big for the consumer market, I expect walled gardens with exclusive parallel worlds and restricted access controlled by a few. 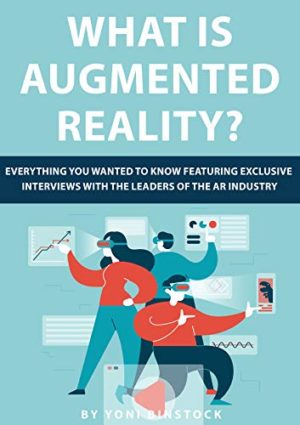 AR has great potential and could get ubiquitous for all mankind. It should be the next big thing after the internet – but in three dimensions all around us. We must be aware to do it right and create a common infrastructure and non-profit base for it. Like the design of the internet, it should be decentralized and not be owned by companies. A common protocol should enable data exchange between actors. Commercial institutions could and should build on top of it, but we must have an open lower layer for all to have access to it and build an interoperable system.
Compare it to the paved streets in your city and house numbers: it’s a common good and publicly taken care of. But then commercial trucks, Ubers or private cars can drive on it and reach the users. We should try to enable a fair share of this infrastructure for all participants and avoid monopolies. The internet had this kind of start before it moved heavily to some five big players that control everything by now. It would be a shame to see an AR cloud, metaverse, upside-down or however you want to call it to go down the drain like the classic flatland internet. AR is still in that early stage to develop and stay open. We must take the responsibility now and be sensitive about this when building AR spaces together. Different initiatives like OpenXR or OpenARCloud among others are trying to approach this today. So, get involved if you love AR!

Make sure to check out Yoni Binstock’s book over here for all the interviews!