I just returned from Cologne and this year’s Gamescom. Definitely big fun, but way too crowded on public days! (And even hard to get a demo on press day. :-)) Nevertheless, I took the chance to look at many of the latest versions of VR devices and was scouting for AR. But this year all was focused 100% on VR experiences and a few AR demos were nothing we haven’t seen before. Therefore I wanted to comment on the VR HMDs myself! (See some impressions on flickr!)

All of these different smartphone-in-front-of-your-face demos I have seen (with GearVR, VRone, Cardboard, etc.) were lacking awesome visuals and interaction. Mostly it was about turning your head in a dome. The real potential of VR and immersive interaction was not played out well here. This is partially due to the lower image rendering quality but even more caused by not-so-well-working tracking – not even six degrees of freedom – and missing physical interaction with your hands. One simple fun demo I liked, though: using the VRone to see a first person perspective of a real remote controlled toy car, that you could move by head movements through a real track! A nice out-of-the-body experience in the real world (but with laggy video feed). But, let’s now focus on the three big ones: Project Morpheus from Sony, Oculus Rift Consumer Version and HTC Vive.

Sony’s HMD is always the eye catcher due to it’s tronish glowing look. But qualitywise it’s also definitely under the top three. My headset did not 100% close the view around the nose below the screens, but that was definitely forgotten after starting the session. Like with the others you could see black areas around the lenses – if you focus on it. But again: during the session you won’t notice. The resolution was subjectively the weakest of the three, maybe due to the not existent anti-aliasing in the demo (sacrificied for 60 Hz performance?). And again: during the session you won’t notic this. The game I played was a car pursuit shoot-out situation on a London highway. The best part: using two well-known Move controllers. The demo presented the real position of my hands as virtual gloves in-sync and I only needed to grab and release items (like in the real world): grab gun cartridges, open the door, glovebox, trigger the gun. No visible latency for head tracking or hands was noticeable. This was the strength of the demo: the natural interaction worked so well that you did not need to think about it and could focus fully on the action overflow! The demo was real fun and catchy, but definitely only a demonstrator. As a game it would probably get boring soon. Visuals were not state of the art of AAA titles 2015, but the experience made me really remember me being in a car chase shoot-out afterwards! The immersion was still great! 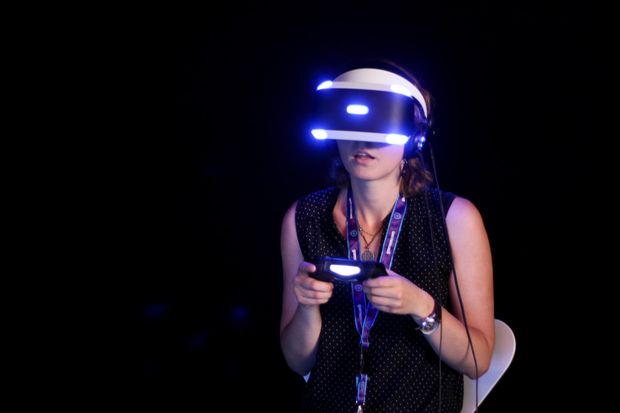 After power surges and long lines it was time to try out the consumer version of Oculus. You could only opt for a single demo (I chose Eve Valkyrie) and unfortunately only got the xbox controller (not the Oculus Touch – fully tracked). You were seated on a armchair in a small living room to mimic your living room. I point this out to make clear that all Oculus (and Project Morpheus) demos were played seated. No demo used body movement that was above turning your upper body on a chair (too bad). The new headset from Oculus is light-weight, closes well and feels well produced. Resolution has improved further and you will not consider it bad during usage (no visible grids or pixelations). Obviously this goes hand in hand with the content shown: Eve Valkyrie was very impressive (video) and you are directly sucked into their outer space. Tracking is flawless and at this moment you need to scream: if anyone plays an FPS like this in 2017 without VR he or she is really stupid! Here you could really see the barrier we are about to cross! It’s a new era of gaming coming up and new games and – still – interaction forms need to and will be developed. Using the xbox one controller works well (and if you are a pro gamer with it you will be happy) – but I cannot really get used to it. For games like Eve it definitely will be fine to use joysticks or gamepads – mimicking the “real” steering wheels or joysticks of vehicles. I only hope that Oculus and the game companies will also support many other input devices. E.g. I would have preferred to use a real flight controller / stick to play Eve. (You just don’t have enough control in your thumb.) Immersion is perfect and we can only hope that it will work well to play a longer session without the need of taking the HMD off (to chat with friends? to change settings? will it hurt after 2 hours?). We will see!

The HTC Vive comes as the third big player. For me it was the best of all! Why? Resolution felt the best, full coverage of my field of view, comfort the same, sharpness or screendoor effect nothing to complain about. But the true reasons? Probably a mixture of two. First: I was able to HTC’s Vive at the nvidia GeForce booth and possibly they just squeezed the biggest number of polys through to me? The demos were visually stunning and you 100% believed the immersion visually alone. Second: Vive was the only demo (to the public) that allowed moving physically through space – not seated on a chair! Their external two IR-camera tracking worked at high rates without any lags whatsoever. It consumes more setup volume but it was worth it! I could move on a 3×3 meter square (a virtual grid appeared when leaving the available physical space as a warning, neat!) and get real close to the tiniest details in the well rendered world! Their tracked sticks allowed a natural interaction (like Morpheus) that was so much fun and needed no explanation. Due to the virtual representation of your hands and the exact tracking you really feel the presence and get really scared when sharks or robots approach you noisily! I guess every HMD gets the grade “A”, but Vive with three stars next to it – thanks to the full physical immersion and the most stunning content. I was exited as Tanel, when I left the robo lab demo (sneak into the video start to understand ;-)).

2016 will be exiting! So gear up and my hint: pay close attention to Vive – maybe you want to compare with Oculus before nailing down a decision for the biggest one!

To get a few images from the Vive demos shown you can see Lucy’s & Rob’s comment. They include a few shots of VR footage: