Or am I? Was metaio bought by Apple? The last weeks were awefully quiet around metaio. Their insideAR conference in the states got cancelled, their complete website went down (leaving some landing pages), metaio’s developer area states to terminate product support this year, twitter offline. No comments were given anywhere to the developer community. Everybody left completely startled and confused – and afraid.

Now a notary document appears on twitter claimed to be from a (actually existing) Dr. Haines from Frankfurt. But does this prove anything? A share value of 1 €? A leaked document on twitter? Is this the way it would go public with Apple? 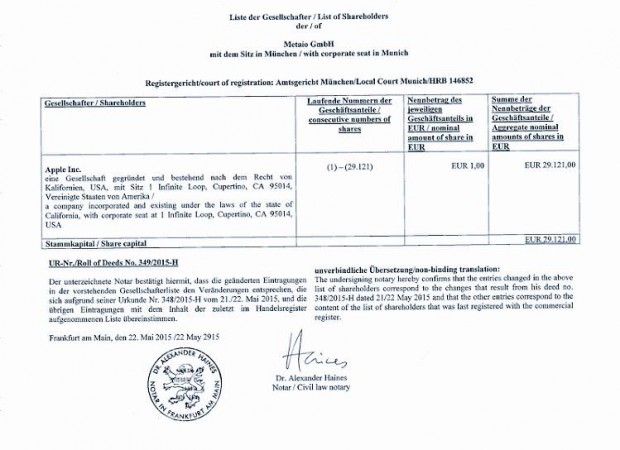 Let’s wait and see for official news to pop up. My first thoughts, IF Apple really bought them: congratz to the hard-working people at metaio and the accolade being bought by Apple! Truely a confirmation of German (Bavarian) masterpiece of engineering! It could give a big boost to the development of our beloved augmented reality to foster new hardware, software and a larger roll-out for everyday users!

… but will the developer’s community be happy? Will the users be happy? Apple is known for their restrictive designs. Open-sourced research guys or 3rd-party extension developers might have a hard time. What will happen to all the developers out there? Do they need to search for other engines for their existing and ongoing apps and tools without notice ahead? Looks like it. That would be tough and uncool. If Apple is in, will the new AR be fully proprietary or will the big companies finally agree on open protocols or standards for AR (like the OSVR initiative)? Well, I doubt it!

Fingers crossed for a good step for a great AR future!

Apple has confirmed their acquisition of metaio (stated by different sources, German news magazine SPIEGEL says to have a confirmed statement from Apple)!