I’m back from my vacation and it’s time to kick off with some summer updates! Guess I missed the biggest world cup party in Munich ever (congratz to the German team!), but that’s okay. I could watch the game in France with some Dutch beer (d’oh). :-)

Quite some news happening to blog about, also steering towards big upcoming events (ISMAR 2014 in Munich, yeah!)… but for today I’d like to stick to a small update on a neat kickstarter pledge I’ve found, entitled “Modern Polaxis – A Modern Augmented Reality Comic”.

Sutu, the creator, wants to create an augmented comic book, that cannot only be augmented with some fun layer but also continues the story through the additional media and reveals the actual nature of it. In short it’s about:

The story is about a paranoid time traveller known as Modern Polaxis. The book will be presented as Polaxis’s private journal. Polaxis writes about his day to day life, but all his secret information, his paranoid delusions and conspiracy theories, he hides away in the Augmented Reality layer. 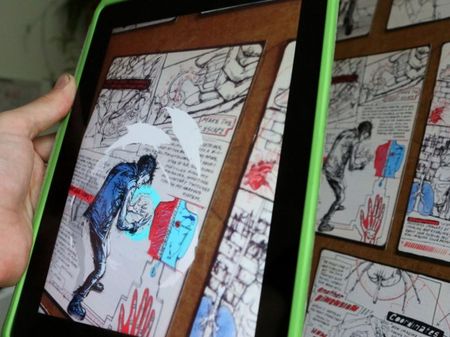 So, please go and take a look. 16 days to go and I’m really curious how Sutu will combine the two layers (drawn and superimposed via AR CG) into an intriguing story, where it’s not only a gimmick for the pure visual fun. I hope he finds a good way for this cross-media approach to work. Seems he has some decent ideas up his sleeve. Also, I like the protagonist’s look and the overall jagged, punky style. Hope it works out!