A nice new concept video “Land Rover Reveals Transparent Bonnet Concept” hit the web and received some attention:
the car’s bonnet appears translucent by a visual overlay to the driver’s view via a HUD, showing the camera-recorded ground underneath. They briefly describe it as: Land Rover reveals world’s first Transparent Bonnet Concept allowing a new level of driver awareness with a ‘see-through’ augmented reality view of the terrain ahead, making the front of the car ‘virtually’ invisible from inside the cabin. 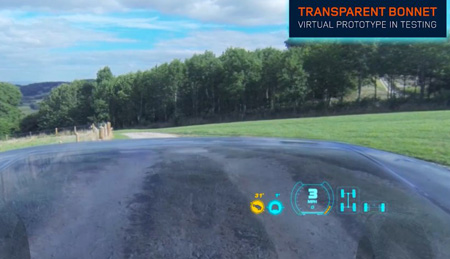 The concept video shows it nicely, so no more words are needed to show the possible (optimistic) outcome:

Why optimistic? Because it is still only a concept and is not proven to really look like in the video from the driver’s perspective. First, the ground needs to be recorded with a single or multiple cameras with a reasonable field of view and exposure time to have a solid visual quality but at the same time match the viewer’s perception of the environment. Then this image needs to be match to the viewer’s point of view. Second, the user needs to get a good (non-distracting) overlay to its windshield (via some HUD setup). This might sacrifice more visual quality (in contrast to the looks as seen in the concept video). The car company might find a solid driver’s head position through the current seat position, etc., so it might give reasonable results, assuming no bigger head movements by the driver…

Blair MacIntyre also commented more on this issue of geometric distortion and positional problem in his blog, where you might want to read on, if you are interested in this tricky thing.

So, result’s might not be as seen in the video soon, but in general an interesting concept and idea!!