First of all, thanks to Dan Romescu and Willi Schroll for making this first AR business conference happen. Thanks to you and all your helpers we had a great day in Berlin with many great talks, many AR people in persona and cool demos. The setup time was the shortest I’ve ever seen for a conference and the result for an eight week preparation time was really impressive. 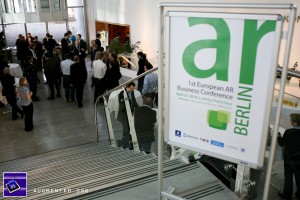 Summing up the conference in a few sentences is close to impossible, so I will need more lines. There were three interesting tracks of talks with all major players and start-ups, where it was actually pretty hard to decide where to go. Nice and shiny Ludwig-Erhard-Haus in Berlin, totally central, was a great location for the first summit. Maybe they have to expand next year….? ;-) The focus was clearly on the business behind AR, but no business without understanding the technology involved. So, we had quite a few videos and live demos during the talks to get our brains and fantasy started. Focus was clearly on marketing, advertisement and location based extensions for the mobile world. A bit lacking the industrial B2B area. But, that was ok. Let’s get started in a sorted way: 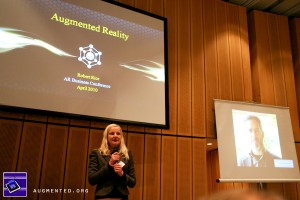 Robert Rice had the keynote speech at the beginning, although the volcano with the unpronounceable name kept him in NY, but with modern computer technology no problem. :) He did a great introduction and made some clear statements on the business in AR. The main issue is boiled down to: we can’t continue abusing AR for ads only. The story and the user experience is more important. AR is only a technology. There is no further use of AR only because of AR. (I totally agree.) We need to focus on the idea behind it and don’t overwhelm the user with too many information (rather adjust to a user’s choice and a push/pull-mode). He underlined not to overhype it and think about the long term impact. Gimmicks and novelty wow-factors will fail after a while. Business needs to just use the technologies to offer new values. We need to think ahead in a 5-10 years frame, rather than yak about another Flash-based ad (they are still fun, of course!). After the marketing+ads area we will enter the entertainment realm, continue to education and medicine.

Total-Immersion’s CEO Eric Gehl shares this vision of entertainment being first and also underlines that AR is now considered a solution and not longer recognized as a technology. Furthermore AR will actually save and support “older” analogue businesses to the computer age by adding value. The digital transition will offer great new possibilities and connect the users. In his eyes, the next step after web-based and mobile AR will head towards our living room and our TV sets (I can relate again).

Two presentations on gaming caught my attention: aka aki and gbanga. These talks stuck to my head quite long afterwards. On the one hand gaming is always fun and compelling, but then they made pretty good points: Matthias Sala from Gbanga reminded us to get the people engaged in the story – not in the technology. After a wow-factor we need good stories that can make the game or the app more interesting than reality. Pixels don’t matter. It’s the immersion. Look at the C64, look at the Wii… graphically not up-to-date (don’t sue me, Nintendo! I love your console!), but still great games where you can loose yourself and the computer remains as a trigger for your imagination. Gbanga, but also aka aki focus on this experience. Aka aki has some great location based games in their pipeline, augmenting the virtual world not (only) by a video feed, but rather by other cool modes: if it rains in the real world, it rains in the game, etc. I just love these ideas. Clear statement on business models by the way: besides ads, we will enter the time of virtual goods. To guys, who ebay-shop WoW-items, this might not be anything new. But this business will explode. See people showing off with their virtual farms today! A non-haptical virtual good remains a fetish for the user and connected (again) with a great story gives the added value, people are looking (and paying) for. I’ll spare you the revenue numbers here. But they are getting huge. :p 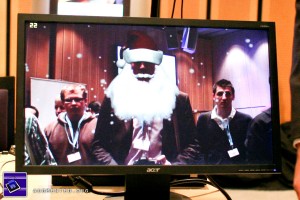 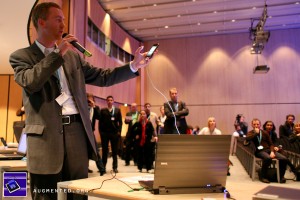 Talking about virtual good and business, almost each presentation – of course – had the business part and was stressing the way to make money with the ideas. Overall focus was clearly on marketing, ads and virtual goods. Location based ads will have bigger impact. Mark Miller from CatCap points out that we are still in the accending part of the hype cycle with AR and that it just remains a tool for our cool new ideas. E.g. the transition from black and white TV to color TV broadcasts was no investor’s decision: it just happens naturally. We need to make use of the new possibilities, but AR is not another product per se. David Blumberg from Blumberg Capital adds, that we need better (G)UIs to control the AR and that we must offer CGI quality, the customers know from computer games and movie productions. He’s aware of the timing and gives it another 2 to 3 years. 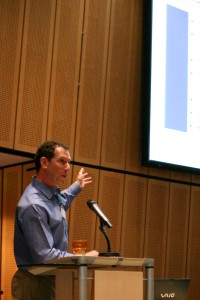 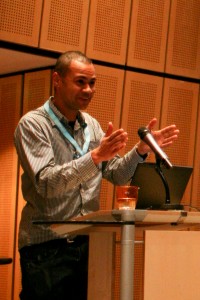 So, whew. Still can’t sum it up here all. To give you some key information on some cool demos, I’ll go with a list:

So, to sum it up: a great conference, which much more information, that is impossible to share in a blog. Great talks, meeting the people behind AR and a nice beer in punky Berlin to end the night in X-Berg. For me, it was a bit missing the B2B cases and industrial applications and was too much focusing on the mobile, marketing sector. A few more live demos would have been great (but with so little time and volcanos around it’s hard), but still: an awesome first conference.

Some more pix can be found here and some more here from Jan.

What did you like most at ARBCon? Do you have some further pictures or videos? Please share in the comments or on my facebook page. :-) Hopefully I will update here with some videos later on.

PS. Due to schedule conflicts I finally couldn’t make it to the ARDevCamp. Next time! (Munich Regulars’ Table due soon!) 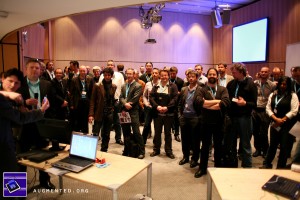 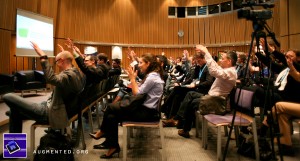