Testing HoloMaps: viewing real-time & 3D map data on the Hololens sure is fun

just yesterday, HoloMaps was launched for the Hololens. This holographic map tool let´s you view 3D map data and enrich it with real-time data like tweets, annotations or traffic data. Read my first impression review on it and what you can use it for now.

What can it do?

HoloMaps is available since November, 15th for Windows Holographic only. So, you won´t be able to try it out without a Hololens. The developing company taqtile writes that they have about 200 cities and landmarks available in 3D to browse through. They describe it in short:

HoloMaps displays topography, infrastructure, and buildings in 3D while integrating data sources to bring contextually relevant information into the map. Collaborate and present to colleagues in the same room or remotely.

There are different versions out in the wild. The one you can download from the store will use Bing map data and show the 2D version during loading time and build up 3D renderings of the cities where available. Quality may vary here drastically and are often low res reconstructions from the aerial photographs from Microsoft. But obviously taqtile depends on the input data here and some landmarks are available in hi-res version to enjoy. They list the following: Empire State Building, Central Park, The Financial District California, Niagara Falls, The Space Needle, La Sagrada Familia Barcelona, The Colosseum, The Magic Kingdom Disney World, Fenway Park and Copenhagen Denmark. So, enough on the cities. What can you see? Check out their video that shows it quickly:

There are also professional cooperations planned and the first one that was already available and used was the HoloMaps version used for the PGA Tour during the 2016 Players Championship of Golf. A new video (just online right now) shows the demo nicely. Here, the user can scroll around on the golf course using the tap-and-hold gesture or by flying to points of interest by talking to Cortana (“go to the club house”, “go to hole 16”). Different views and layers can be activated, for example (quite interesting) the heatmap of golf ball landings on the courts. 3D-scans / 3D models are quite hi-res here and make a very good impression. The software is also multi-user ready to enjoy together.

So, how does it perform and what can I use it for? 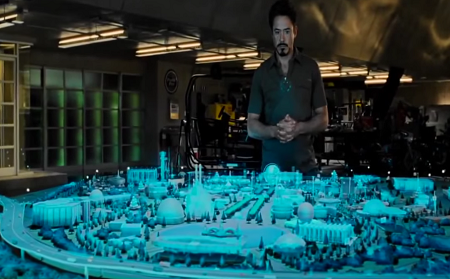 So, I tried it out myself. It worked out of the box, just place the hologram and off you go! I flew over to Munich (“show me Munich” via Cortana) and scrolled around by tap-hold commands. First impression: wow! In almost every Sci-Fi or near-future movie you can see hologram tactical maps or overview charts projected into the room (be it Ironman, Star Wars, whatever) – and with this app you can finally see it happen!

I like the simple presentation of the circular portion you get presented with the small menus at the edge of the plate. The menu moves around according to your physical movements giving you access to it from any point of view. The same works for the weather forecast that is presented behind the city landscape.

Selected layers for traffic flow or annotations worked nicely, though tweets did not show up (maybe there were none at Marienplatz, Munich?). Doing text annotations myself was a bit cumbersome since you can only do those through Cortana (no typing). With special characters or mixed languages it will just not work. But then again: this piece sure is just a demonstrator and obviously you could add more easily. Same happens for the 3D ink annotations where you can use your finger to draw above the 3D buildings. Accuracy is very limited and I guess you would only use it (for now) to highlight a certain building by scribbleing ontop of it briefly.

Overall the demo was great to look at (though sometimes the 3D buildings quality is really rough) and to pan around the land scape. You really feel like a giant observing the small human peasants (or at least their tiny houses) and can easily see that this kind of 3D planning and overview can become a new means to interact and look at information. Sometimes a bit hard was the movement by tap-holding and waving your hand around. Here taqtile just uses the official Hololens gestures of course. But having more interaction forms would help make the experience better. Maybe wave away a map, air select other cities or sights and bring more “haptics” in, e.g. that you can directly click on a building, etc. Would be nice, but that´s limited through the current Hololens sensors / SDK. So, currently interaction is very slim and only shows tweets or traffic as examples. Right now there is not much to do or manipulate – but it´s already a lot of fun to fly around the cities. It´s definitely a wow-effect seeing your real world neighborhoud on your desk and to pan around in it!

What will be next?

I can sure see many use cases and how it continues. The above video from PGA with the golf court is a nice demonstrator, planning city traffic or architectual city planning – or basically any landscape related planning could profit here. I couldn´t try the multi-user mode, but I´m sure especially this social feature will be a wonderful seller for AR! Just like when having a discussion around a clay or cardboard model of a city district (or whatever) you can easily gather around with more people and take a joint look.

Like in the above still from Ironman we can basically take any movie that uses holographic maps as an example for use cases: for planning heists, attacks, killing major holy trees, anything!